The Coast Guard and America as an Arctic Nation

Former New Jersey governor Christine Todd Whitman recently visited the U.S. Coast Guard Academy to speak about leadership and the Coast Guard’s future in the Arctic, as part of the 22nd annual Coast Guard Foundation Hedrick Fellowship. The Hedrick Fellowship brings renowned political, military and industry leaders to the Academy to share knowledge and insight, and provide an opportunity for future officers to learn from the experiences of distinguished leaders.

Whitman, who is also a former Environmental Protection Agency administrator, recently worked with retired Adm. Thad Allen and others to produce a report entitled “Arctic Imperatives: Reinforcing U.S. Strategy on America’s Fourth Coast” for the Council on Foreign Relations. The report, released the day before this event, offers guidance to decision-makers on the new challenges and opportunities presented by the changing Arctic.

During Whitman’s address, she reflected on the Coast Guard’s strong history of service. “If there’s one thing that’s true, and has been true for centuries now,” Whitman said, “is the United States Coast Guard is always ready. And we need you to be always ready, perhaps now more than ever. You’ve been ready with skill, courage and commitment, and those are no small qualities, to ensure that we have a strong and viable future. And today, in the year 2017, perhaps more than any other time, those qualities are going to be called upon as our world gets ever more complicated, ever more challenging.”

Whitman also referenced the report, which notes that the United States lags behind other Arctic nations that have, “updated their strategic and commercial calculations to take advantage of the changing conditions stemming from the opening of the region.”

“The Arctic is warming two times faster than the rest of the globe,” Whitman said. “What we see happening there, we can expect to see happening all across the globe. The Arctic sea ice is shrinking to levels never before seen.”

One of the main goals identified in the report was the funding and maintenance of polar icebreaking ships. Specifically, Whitman called for Congress to approve funding for up to six icebreakers to improve operational capacity in the Arctic, so that there would be at least three operational ships in the polar region at any one time.

“The thought that we have just two, one heavy and one medium icebreaker, to serve both the Arctic and the Antarctic, is mind blowing,” Whitman said. “You don’t have to be a geography major to understand that those two things are not close together, and it is not a pleasant trip to get from one to the other. It is not a pleasure cruise. If anything goes wrong, and the ship that you need is not where you are, it’s going to be a long way away. And so,” Whitman continued, “our recommendation is a minimum of three, and we would love to see six new Coast Guard cutters (icebreakers). Because it takes a long time to build them, we need to get moving on that now.” 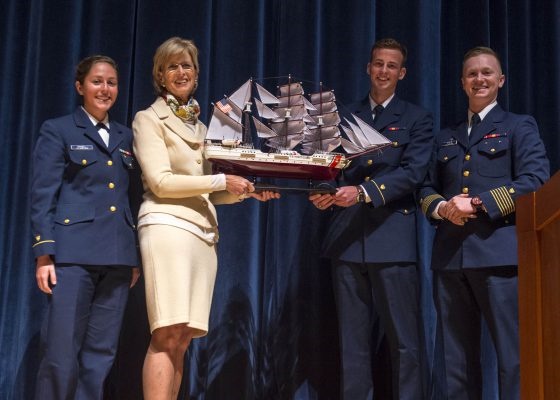 In the audience during the address was Dr. Rebecca Pincus, from the Center for Arctic Study & Policy (CASP). CASP works to broaden partnerships by addressing maritime challenges in the Arctic. Pincus said the report explains the national significance of the region, and why people should care about issues surrounding the Arctic, describing the region as, “super-complex, evolving rapidly and very political.”